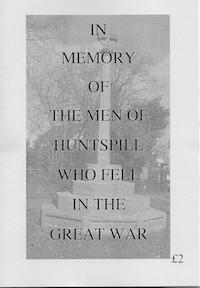 At the outbreak of World War I in August 1914 this country urgently needed young men to join the armed forces to boost the British Expeditionary Forces; whereupon young men from East and West Huntspill joined with thousands of others to fight for King and Country.

In order to commemorate the lives of these young men, Roger Ouston, Genealogy Group Leader of the U3A of Highbridge, has published a biography of their young lives. The publication also gives a brief history of the circumstances that led up to this conflict that, over the four years, cost over 8,000,000 lives and resulted in nearly 30,000,000 casualties.

The U3A of Highbridge is financing the publication.

At the outbreak of the war young men from all over the United Kingdom and the Empire rushed to join the forces, in the early days it was said it would be over by Christmas. This proved not to be so and a vast number of young men, and civilians, were killed, mutilated or wounded, both in mind and body.

At that time the British regular army comprised a small force of professional soldiers; this consisted of approximately 250,000 regular troops in four Guards and 68 Infantry regiments, 31 cavalry, artillery and other support arms.

The Royal Flying Corps was, until 1918, part of the Army; and at the outbreak of hostilities had 84 aircraft.

The Territorial Army Force and reservists that supported the regular Army, did in theory, provide almost another 700,000 men that could be made available, given the time. However, to form the British Expeditionary Force (B.E.F.) of six infantry and one cavalry divisions there was immediately available 150,000 men.

There will be, during the coming months, many reminders of this conflict and the terrible affect it had on those that took part, the U3A of Highbridge felt that Roger’s research into the lives of these local men deserved to be brought to the attention of a wider audience.